Yesterday was Max's 80th birthday.  Can you believe it??  He seems so young, except for that shiny gray hair.

Thursday night we had a little party for him. The family was asked to say something about dear ol' Max.  The boys all had such nice comments and memories about their dad.  The main theme seemed to be he was such a great example to them and was always such a hard worker to support their family.
We girls are so lucky to have been able to have him for our Father-in-law.  I don't think we could've picked a better one, that's for sure!  Even the couple of grandkids that were there had great memories and feel super lucky to be gramps' offspring. 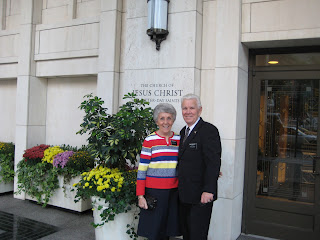 Some people don't know, but David is quite a poet.  In fact he told Eric he had something for Grandpa, and Eric's reply what "what, a poem?".  Yep.  (We did have a few family home evenings where everyone had to write a poem or story.  Some of us weren't so fond of those nights.) So here is what David had to say to his dad:
Clifford “Max” Prescott
The things I remember, are less every year;
But the ones that I do, I hold very dear.
The assignment to speak, ‘bout my own “dear old dad”;
Gave me pause to reflect, on the good times we have.
He wasn’t the first, but he might be the best;
A man who’s named , stands apart from the rest.
His children have learned, through watching thousands of hours;
His grandchildren refer to it, as “Prescott Power”.
It’s a belief, it’s a feeling, it’s a commitment to do good;
He taught us to serve, to do all that we could.
Airman
Mechanic
Carpet Layer
Business Owner
These are some of the jobs that he’s had.
Sunday School Teacher
Sunday School President
High Counselor
High Priest Group Leader
Bishopric Counselor
These are some of the callings he’s held.
4 – far away missions
And a few close to home
Countless hours in the
Some more things that he’s done.
But the reason we Prescotts, have a fullness of pride;
Is not for what he’s done, but who he is inside.
He’ll thank you for coming, he’ll thank you for leaving;
He’s funny, he’s kind, and he loves to take naps.
Clifford Max Prescott, he’s not all that wealthy;
He’s not all that famous, heck - he’s not even that tall;
But the thing that I’ve noticed, after 80 some years;
Is that our beloved Max, is the GREATEST PRESCOTT of all.
Happy 80th birthday Pop!
Isn't that cute?  I love the part about thanking you for leaving.  If you know Max, he always says that.