A few weeks ago my friend Kathie talked me into doing the St. Patrick's Day 10k at Mission Bay-in two weeks! I never jog, and hardly ever go walking. I was super nervous and started training the following day, but with all the rain and being so sore, I was only able to train a few times each week. Saturday was the big day, and I was actually really excited about it. We agreed to stay together no matter what. We did it, and we weren't last! It was so fun and when my body quits hurting, I'm going to keep it up.:) I'm so glad for the push she gave me. Who knew I would do my first (and only????) 10k at 44...I mean 29! 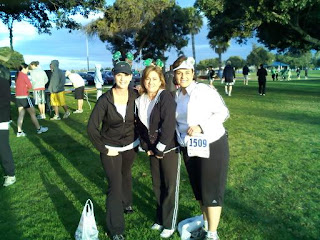 I hate the way I look in pictures, but David was so proud of me he kept taking pictures. He wanted to blog about the day, but he hasn't gotten around to it. He's such a sweetheart. He carried purses, jackets and bags all around Mission Bay for all the girls - broken ribs and all. 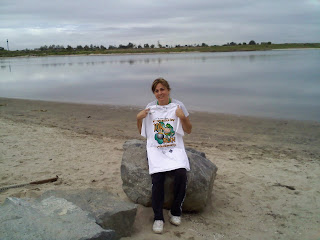 It was so much fun I just may do it on my own again someday to see if I can beat my own time.

My boys are ROCK STARS!!!

This coming weekend, the Jakked Rabbits (my son's band) are playing at the Perris Fairgrounds (in Riverside, Ca). Not exactly sure what time they go on but the event starts at 2PM & they are the opening band (see flyer above). The event is over at 9PM. If you are in the area, come check them out!!

If that's not your fansy, then come watch them open for Bad Religion on Friday March 19th at the San Diego House of Blues!!! Yea, you heard me right, Bad Religion!!! They are so stoked... Buy your tickets now cuz this is sure to sale out!!! Woot woot.... I must say I am very proud. For those of you who were wondering, Zak couldn't be more happy for his band. Good things come to those who serve the Lord first!! He's looking forward to playing with the band again when he is done with his mission. Rock on!!
Posted by Prescott family at 4:34 PM 5 comments:

Friday night was the start of Troy & Jason's swim season. The boys did such a good job. Their times were almost as good or better than where they finished off last year. CIF is looking really good for them this year! David was very bummed to realize he missed their first two meets since he was at varsity training. Maybe he should have stayed home:(
(See earlier post) 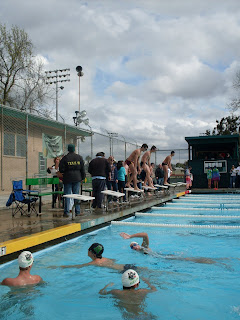 Saturday morning there was a freestyle meet at Helix. They did pretty good, but freestyle isn't their strong strokes, and they were really worn out from the meet the night before. I didn't get zoomed in, but Troy's mid picture on the diving block. 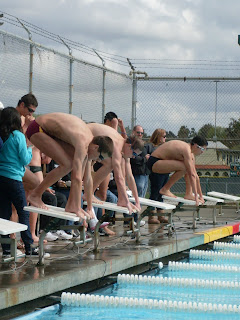 I did get zoomed in for Jason. He's the scrawny looking boy right in front:) 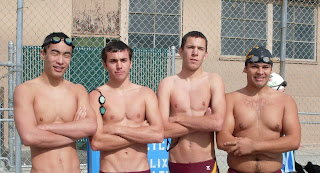 Here's their relay team. They got 4th place.
Troy and "Asian Man" on the left are in the doghouse with coach. During their 200m (8 laps)event, Troy and his teammate were swimming in adjacent lanes. They thought it would be fun to switch lanes during the race. The rules for club swim are you must end in the lane you start in, no touching each other, and no touching the bottom. As soon as the whistle blew, they dove in and switched lanes (not a great idea to do RIGHT in front of the ref). Everyone was cracking up and intently watching to see what they were going to do. They switched back at the turn of the last lap. They felt pretty safe doing it since this particular meet didn't really matter for their season. The ref went up to them and told them that wasn't allowed in high school swim. They were dq'd and he walked away laughing. Only coach wasn't amused. Hopefully he'll be a little happier by the time Monday practice comes. And hopefully Troy and Andrew learned their lesson, and got their rebellion out of their system.
Posted by Dee Dee at 11:27 AM No comments:

Warning - Scouting Can Be Hazardous to Your Health

David was asked a few months back to be part of the Varsity Scout Board (or whatever they are officially called). He not only gets to do his calling, but help put on all things that do with varsity scouting. That includes the yearly triathlon, mountain man rendevous, and all of the training for new varsity leaders. He gets to go to these activities, as well as all the planning meetings. He really loves scouting and to volunteer. Several times a year they have training meetings which are Friday night and Saturday all day. They are like little boys - staying up till midnight and getting up early. At 6am this morning they were playing ultimate frisbee. He went to catch the frisbee, somebody bumped him one way, and his brother, Brien, ran into his side. Three cracks were heard. David, being the trooper he is, sucked it up and worked at his duties all day. He knows at least three ribs are broken, maybe more. That's sure a good way to get out of finishing his "honey - do" list!!

A strange coincidence - the scouts were playing an OTL sort of game a couple weeks ago and Brien ran into a table and broke some ribs. I guess two of the leaders in the group will be taking it easy for awhile.
Posted by Dee Dee at 8:23 PM 1 comment: