I love decorating, and even our backyard. All the guys in our household laugh at me. Over a year ago I bought an ugly surfboard at a yard sale down the street with plans on making it cute. My sister came to town this weekend and we got busy on it. She helped me design it, made stencils and cut them out. I am so happy with the way it turned out!! Thanks, Charlene!!!! 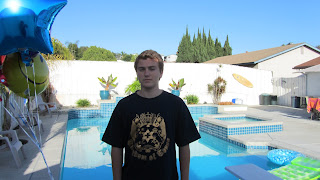 Of course I forgot to take a before picture, but you can see it in the background in the top picture.  UGLY!!!  (The surfboard, not Eric:) 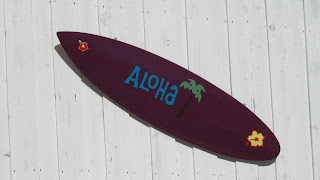 Yesterday Jason turned 19 years old.  Wow!  Some days when that crying baby wouldn't stop I didn't know if I would ever really enjoy being around him, but that didn't last too long!  He is a great young man.  Jason is by far the most helpful of any teenager I know.  He is in his second semester at BYUI, and giving school his all. I really miss him when he's gone, except for the fact that he eats non-stop and always wants me to fix him food.  Now he is living in an apartment and fixing his own meals, studying his heart out, and working out every day. 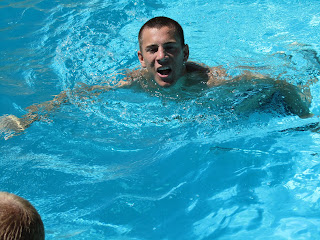 I'm really proud of him and the man he has become.  He has such great potential and is truly one of the smartest people I know.  I know that he will be very happy when he comes home in July and gets to celebrate with loved ones. Miss you Jason!  Keep up the good work!!!!
Posted by Dee Dee at 9:48 PM No comments:

Sunday night at dinner David and Eric were trash talking each other.  Somehow David mentioned that he would take on Eric at tennis, and that he would win 10 out of 10 games.  Eric took the bet.  It worked out that David didn't have his usual Monday meeting at work, so came home early enough to go play.  Boy, you should have heard all the jibing going on.  They were roasting on each other so much, it was hysterical.  They suited up for the big match... 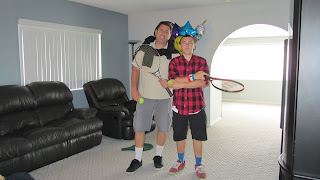 Look at that serve!  One thing about David is that he will never let the kids win if he can help it, and he is ruthless.  He did mention that he wasn't 100% sure he could win all 10 games, but gave Eric all he had. 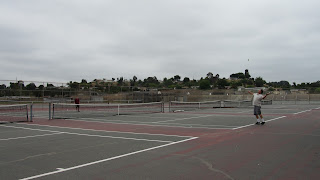 Eric did make the old guy run a little. I was hoping that we wouldn't be at game 8 already.  I felt so bad that Eric was getting killed!  They did get to deuce at one point, but David won that game too.  The comments were getting really funny about this time,  and I was secretly hoping David's shoulder would give out just for a moment or two because I really wanted Eric to win at least ONE game. 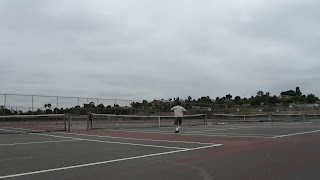 Someone is gloating:(
Poor kid! At least he is a super good sport.  David challenged him at racquetball and basketball, but he was smart enough not to take the bet. 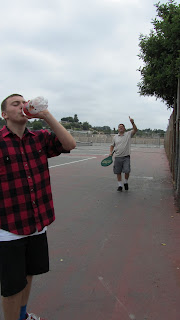 It really was a fun time although it was brutal.﻿
Posted by Dee Dee at 7:02 AM No comments: