Varsity Scout Triathlon 2012!!  Eric, Noah and Elam did a relay, as well as Taylor, Mike and Guy.   Bishop, David and Mike did the whole thing.  Becky swam, and Jessica biked and ran as a relay. 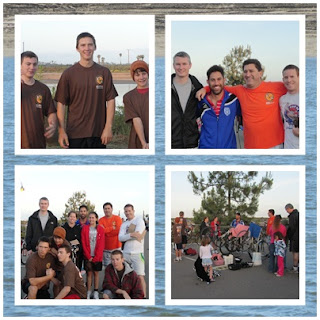 There were over 275 people this year, which is WAY more than normal.  They did the swim in 4 heats.  I almost missed David getting out of the water, because I just KNEW that the guy holding on to the lifeguard's surfboard was him.  I noticed Bishop getting out and my friend Kathie said, "there's David too".  What a terrible wife!!!  I did miss getting a picture of Eric getting out because my camera fell asleep and I couldn't get it back up in time, but the middle left picture below is him running to tag Noah.  Bad mom, too:) 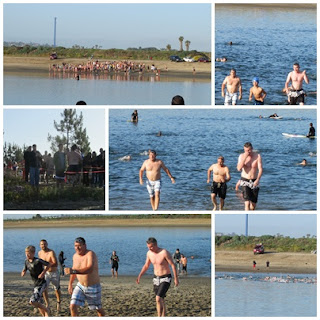 Bishop and David did such a great job.  Bishop beat him by about a minute.  Noah was so sweet that he told his relay group, "let's go run with David".  They were so happy to cheer him on.  It sure helped lift David's spirits, too.  He said it was really cool running in with everybody cheering. 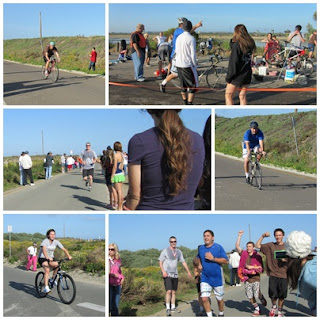 Laura took one of my favorite pictures (below).  He made it - and he didn't die!!!  Good job SW Stake.  We're looking forward to hearing the official times.  I don't know if David will ever do it again, but I'm so proud of him for doing another hard thing. 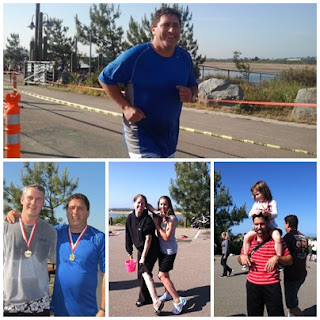 A couple weeks ago David told me that he was going to do the Varsity Scout Triathlon this year.  I was completely shocked!  We've gone all but one year over the past 8 years, and he's never done it before.  The first year he planned on doing it with Corey Bickmore and Ron Leavitt, but then practiced running and realized his knees couldn't handle it.  So after breaking his leg last summer right at his knee, I was extra concerned.

He wanted to practice because the swim was what concerned him the most, so Tuesday after work, Eric and I met him down at Fiesta Island. 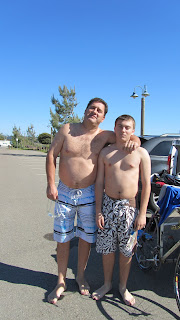 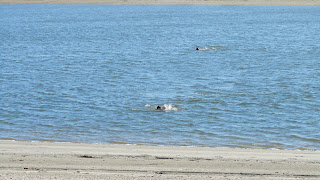 The tide was really low, so that was a bonus.  When it's average tide I think it's around 200m.  Off they went!  Eric was the winner with a time of 2:35, David at 3:54.  They both did the back stroke a little bit (David a little more than Eric:) and nobody drowned! 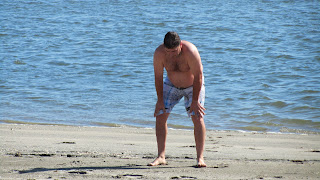 Isn't he cute?!!  I asked him if he was okay and his response was, "I don't know".  At this point we were a little concerned, but after a few minutes of rest he got onto the bike and was on his way. 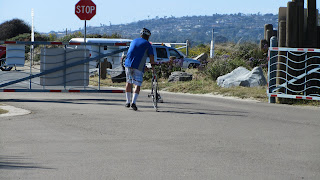 My plan was that if he didn't come back within 20 minutes, we'd get in the car and go find him.  In only 10 minutes he returned feeling great! 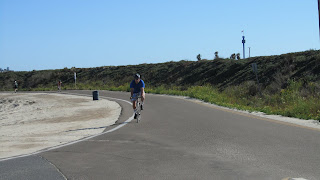 Saturday is the big day, so hopefully he will be able to practice swimming a little and being able to get his lungs in better shape.  All that walking he's been doing didn't prepare him as much as he thought it would have.

Eric had so much fun he was bummed he signed up to do a relay, because he really wants to do it on his own now.

My biggest concern is - since David won't be the lifeguard in the canoe, who's gonna help him?  haha  It really is a different story when you have 50+ people in the water at the same time kicking you in the face.  Good luck, Prescotts!!
Posted by Dee Dee at 9:57 AM No comments: 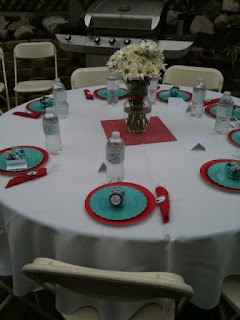 Last weekend I went with my mom & my sister Jodi up to my brother Eric's house for a baby shower for his daughter (my niece & my mom's granddaughter) Taylor. Now Taylor is the same age (or almost) as my oldest son Zak. So it's kind of crazy to think that the possibility of grand babies could be in my not too far off future. Yikes! The thought makes me both happy & a little bit crazy. Don't get the wrong idea, I'm not announcing anything - just made me think a little that's all. Ha ha.
I'm not old enough to be a grandma, RIGHT?
Anyway, I have been waiting all week for one of my sisters to blog about this special occasion - especially because they took WAY more pictures than I did (mine are right off of my phone - sad really). But since they haven't, I can't wait any longer (I could be waiting for weeks, if I know my sisters....) Ha ha!
Hopefully this will encourage one of them to blog soon. Especially because I didn't get any pictures of the MANY people who attended. You'd think Taylor was well liked? I kid, because she is well liked - in fact I happen to know a whole bunch of people who just LOVE her. 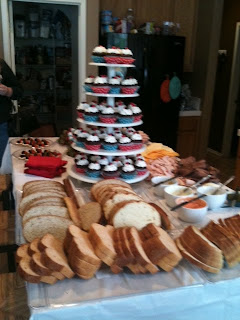 This was the spread of food for the guests - if you didn't make it, you missed out!
There was another area just for 4 different salads that I didn't even get a picture of... does my sister in law know how to throw a party or what? It was wonderful & the cupcakes were pretty yummy too & I don't really care for cupcakes much. 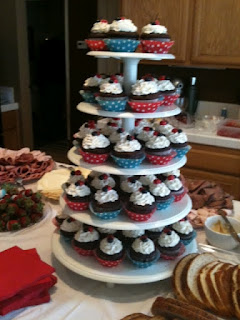 In fact the cupcakes were not only delicious but cute too! I had to get another picture... (because it was on my cell phone you can't really tell that there were little lady bugs on top of each cupcake made out of fondant). One of their family friends made them & she did a great job! 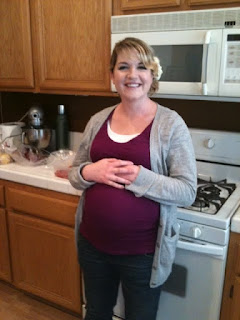 Here is the lady we celebrated (actually both of them, see tummy). Little Page Arynn should be here within a few more weeks. Can hardly believe our little TayTay is having a baby girl... seems like just yesterday that her mama & I were pregnant together - oh some 20-something years ago!
Congrats Taylor & Michael... we are all super excited for you & happy for the new addition to our family!!!
Posted by Prescott family at 6:18 PM No comments: 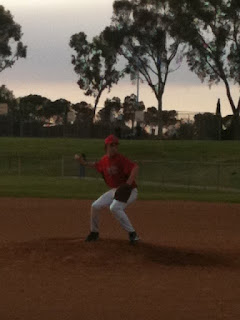 Noah is playing baseball again this year (2nd year in a row). Some people are surprised that Prescott's can actually play baseball... it's not the sport of choice for most but believe it or not Noah is actually pretty good for never playing before. 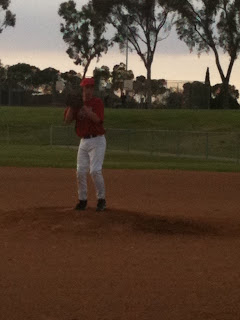 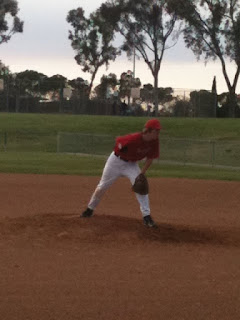 He does enjoy himself & continues to improve. This year his coaches seem more patient & have helped him in his pitching skills. He still doesn't have complete control of the ball, but if he keeps practicing he will eventually gain control. With that & the speed he has he will be quite a pitcher. I'm thankful that he is on Joel's team - so that even if we don't make it to his game someone is usually there watching! Ha
I'm also grateful for good friends who encourage my kids & help support them in the things that they enjoy. We are extremely lucky! 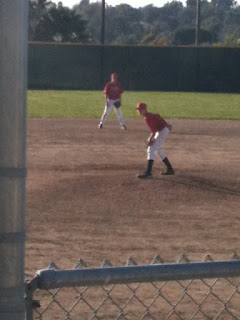 Go Noah!!!
Posted by Prescott family at 6:08 PM No comments: